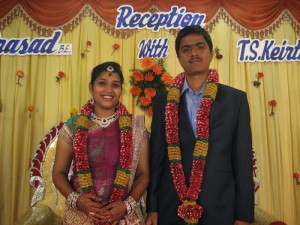 Read More Happily ever after

I said the above words and that is how my marriage got fixed and is going to happen on
9 February 2014. 😀

What made it even more special was that it happened on her birthday.

She stood by the moonlit window, silently looking out to the beyond, not looking anywhere in particular, but lost in thought. Sigh! She let out a slow, long-drawn breath and looked back at the little boy, sleeping peacefully on her bed. The innocence and peacefulness touched her. She has never been gifted such kind of peacefulness. The ghosts from her past always haunted her. The mistakes she did, the chances that she missed, the opportunities she let go, in front of her very eyes. All the time knowing that she will never be at peace ever again and that life will never be the same ever again.

She wished from the depth of her soul that she knew better. How better life would have been if she knew that Aakash was the one for her. They both were in love and were a happy couple until Vinay came along. Blinded by a trance and urged by the separation from Aakash, she slowly lost her sanity and fell for Vinay. She could not believe how it happened. She still could not fathom how she went astray. Her love for Aakash had been so pure. Yet, how did this happen? That is one question to which no one had an answer. Aakash had tried to make sense with her, fought hard with her to make her see that she was willingly going to destroy her life. He fought with all he had. He never gave up. But, she refused and brushed him away so strongly that she broke him to pieces.

What happened after that was just a swirl. She has pushed away Aakash so hard that he could not dare to come back to her and reason with her. And in her trance, she was in temporary bliss. And then, slowly it had happened. Before she knew, the trance was over. The mist lifted and she saw the truth. She was crushed. She kept thinking that it was a bad nightmare and she would wake up soon and find herself in Aakash’s warm arms soon. But, that never happened and she realized the implications of what she had done with her life. Life had presented such a golden chance to her as to none else. She was so lucky to get Aakash. They knew each other from their childhood and so made for each other. How could she have been so blind all of a sudden and thrown all that away? That was a question that she had been searching an answer for so long, but never got one. And she knew, she never will.

After she realized the truth, she could no longer stand to live. Many things happened and all she remember now was being all alone, all of a sudden with not a single soul to care about her or for her to care about. She realized Vinay was not “The guy” for her. She should have known better or at least she should have listened to Aakash. She searched high and low for Aakash, not to get back, but to apologize. Because she knew, she does not have the worth to be his. She was that pathetic. She was sick of herself. On the outside, she just dragged herself on with her life. Inside, she was dying every day, cringing at what she had done. That was when she had met the little boy, nameless, homeless and helpless on the road. She had adopted him and named him after Aakash. Since then, she has been holding on to life only for 2 causes. One, to find Aakash and apologize and the next to bring up little Aakash to be a citizen of whom the nation would be proud of. Except that, she has no reason to live for. She sighed heavily and decided to let her tired body to rest. As sleep took over, she knew that the ghosts from her past will visit her again, tomorrow.

P.S: My first guest post and that too @ The Midnight Sun! 🙂 I know I have turned a geeky, almost-technical blog to a different genre, by starting off with a story 😛 Hope you like it 🙂